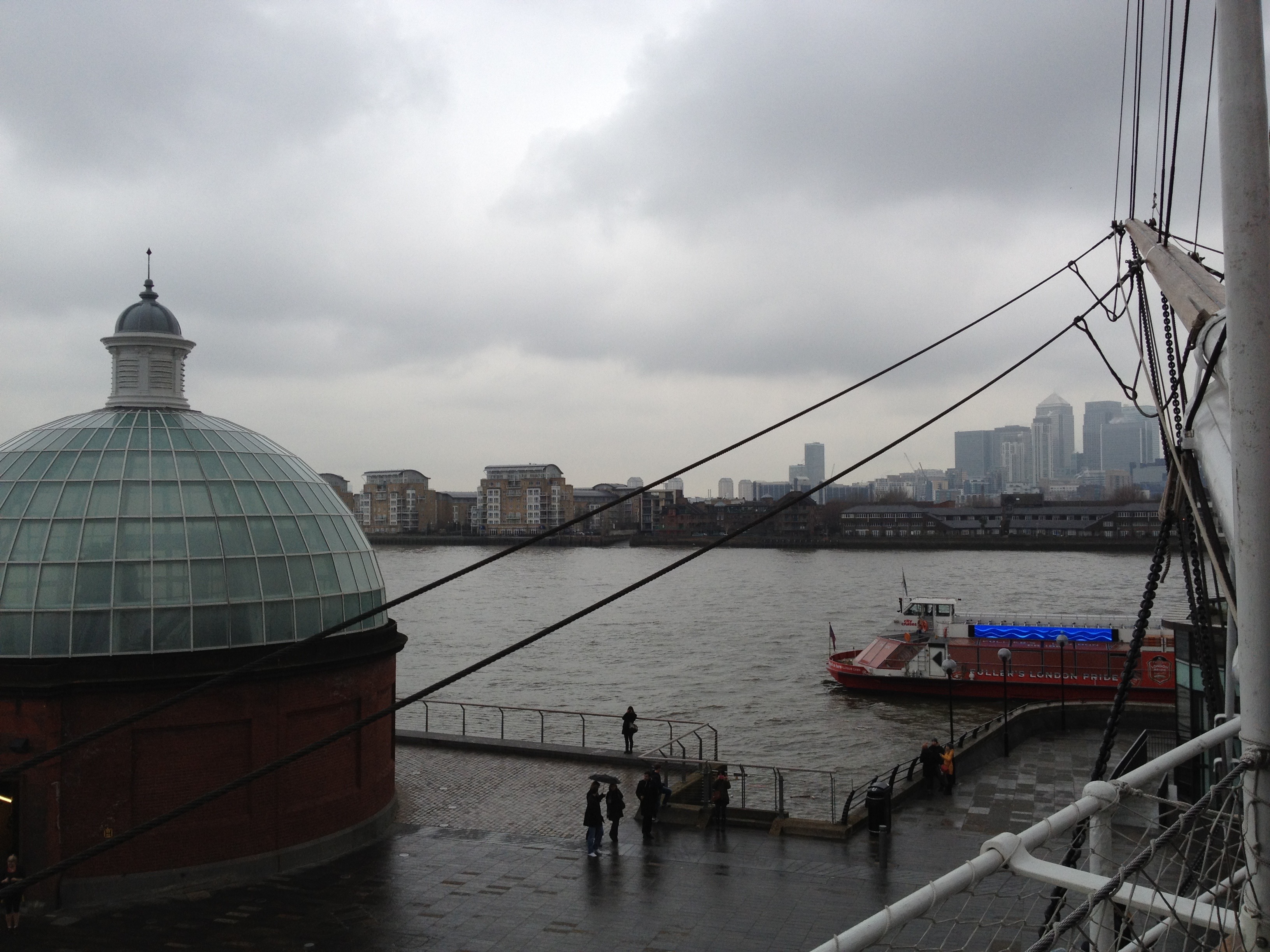 London has always been cold wet and historical

Brian is not qualified in history. Or anything

It’s time to root back through the annals of history to uncover the murky history of London. In this handy print-out-then-cut-out-and-keep-then-use-then-throw-away guide we take you on a brisk Lazy Planet Tour of the History of London.

Please note. As this is the Lazy Planet Guides we may ask you to forgive us some small inaccuracies that may have crept in.

London was founded in 85400 BC by DINOSAURS.

Evidence for this was uncovered in 1896 when eminent Victorian Scientist Billiard Jeremiah Slagheap first dug a hole in his garden in Hammersmith and, finding a hole the size of a DINOSAUR HOOF declared that dinosaurs must have roamed the land in HAMMERSMITH and therefore founded London. 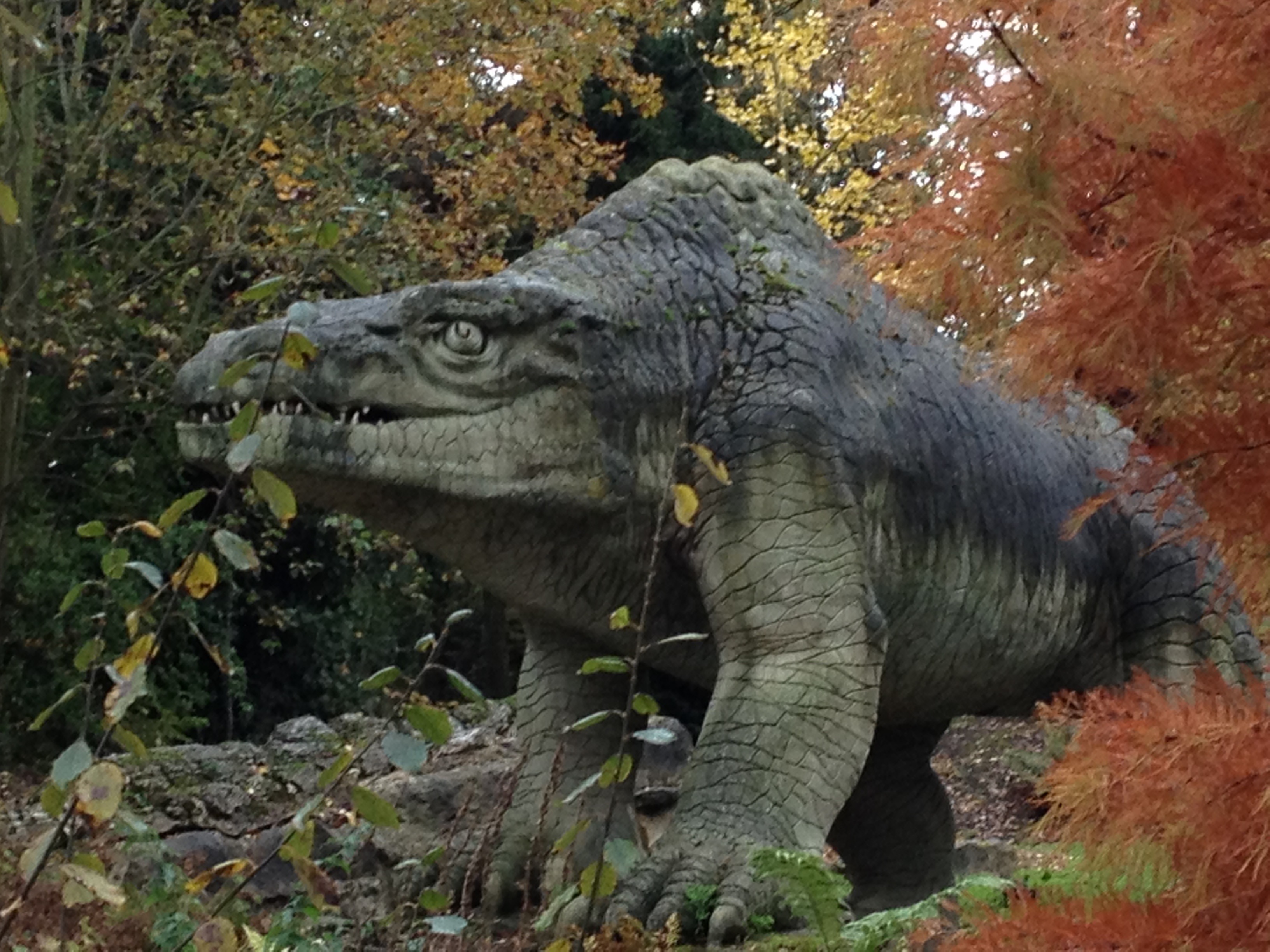 Dinosaurs founded London in the Past

London was uninhabited until much later on in history, really until the ROMANS arrived.

The Romans, being very fond of living nice, decided that this small curve in the River Thames was the perfect spot for a trading post, a fort, a massive temple to some of the Gods they made up and some TOGAS. London was born. In AD54. 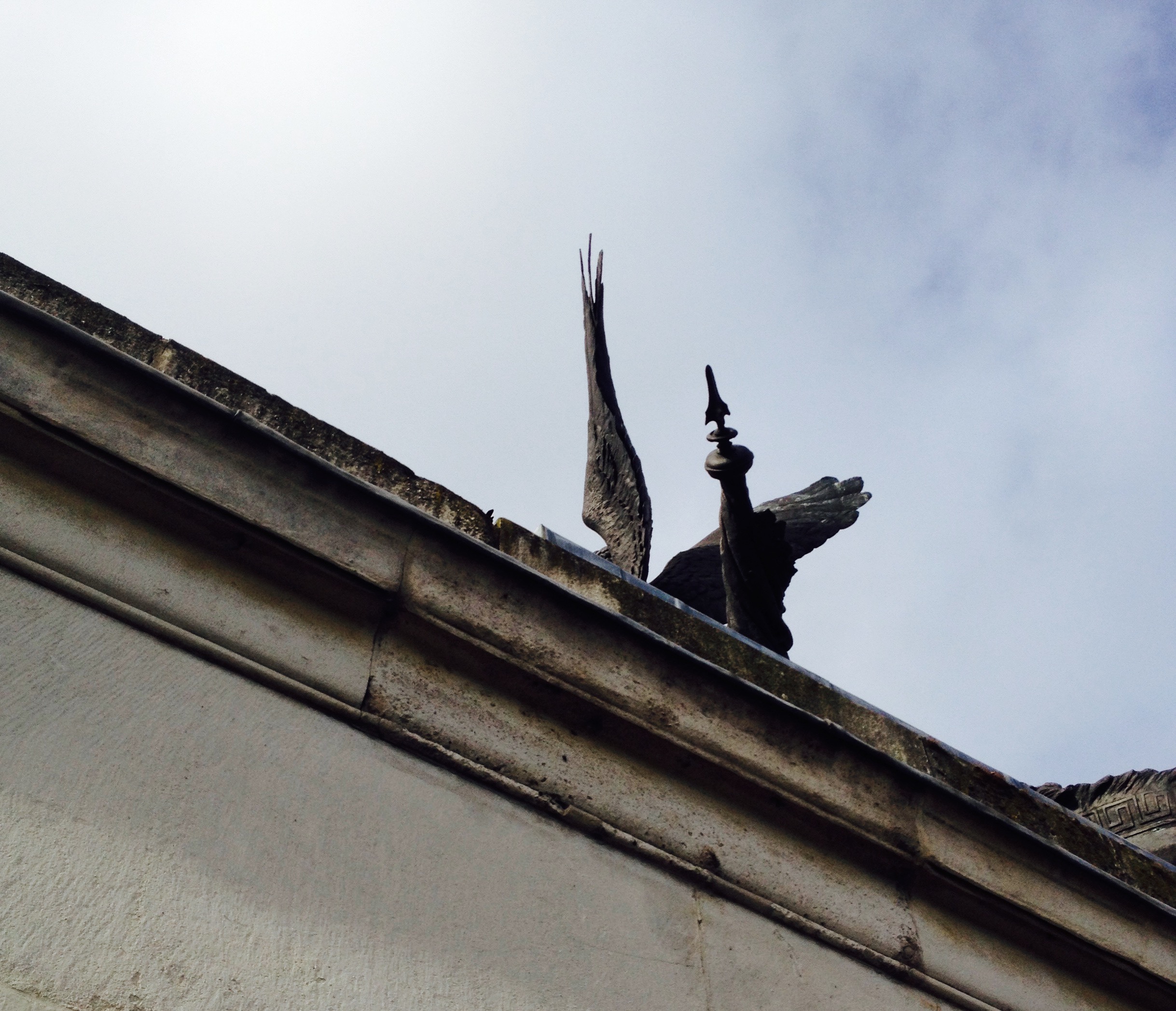 Detail of a Roman thingummy somewhere.

To the ROMANS London was a very popular trading spot where they would meet with people coming from the continent and tell them to go back to the Roman Empire which covered most of the continent. This tradition is commonly practised today.

The Romans brought many things to London including its regularly laid out streets, water, lions and war many of which can be seen on the streets of London today.

It’s easy to imagine how the locals were awed by the presence of so many men with swords who told them what to do. They left quite a legacy!

Then they left around 341 AD. Things were getting busy in the Empire at that time what with it collapsing and it was decided that keeping Britain or Britannicus as it was known was no longer a priority and anyway it was cold. 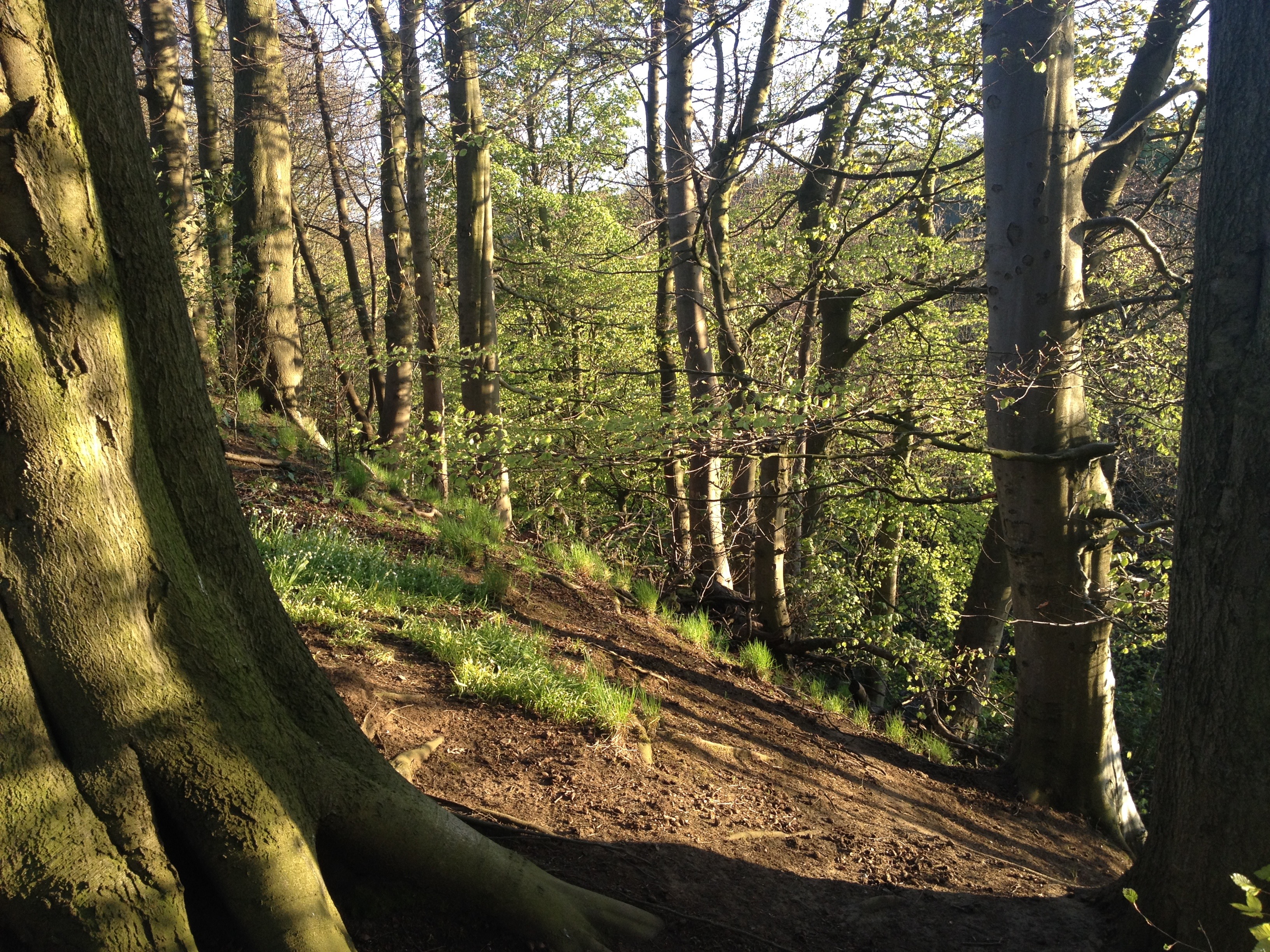 This is what London looked like when the Romans left

The leaving of the Romans left a sizeable gap and local tribes were allowed back into the area. These were made up of Angles and Saxons from Germany and were basically VIKINGS. They raided the coastal town of Londonwich which was today where the Strand is only less busy. After a few raids the Londonsfolk moved back into the walled city of London where there were walls, locked the door and no-one saw them for several centuries during which time they invented the congestion charge.

After the Vikings stopped being so violent and had explained they weren’t really raiders they’d just run out of space for their sheep, the Saxons begun to accept them. Suddenly a new threat appeared on the horizon when the Normans – who were essentially NORSE MEN and so VIKINGS started to eye up the land of the Angles who were DANISH or sort of and the VIKINGS  who were from Sweden.

And so the battle of Hastings was born and in 1066 the Normans took over the country and began numbering the kings. They built the great big Tower of London to mark the event and opened it as a tourist attraction where you could watch beheadings for 10/6 as long as you didn’t eat the ravens or make fun of the beefeaters. This practice still continues today.

England was ruled by the Normans for years and London prospered where it grew around what is known as the City today. It remained the captial all through the WARS OF THE FLOWERS where two groups of Northerners the Lancastrians and the Yorks fought about who should be king and which was better the North or the South and within the North whether the West or the East was better. This is a tradition that continues today. 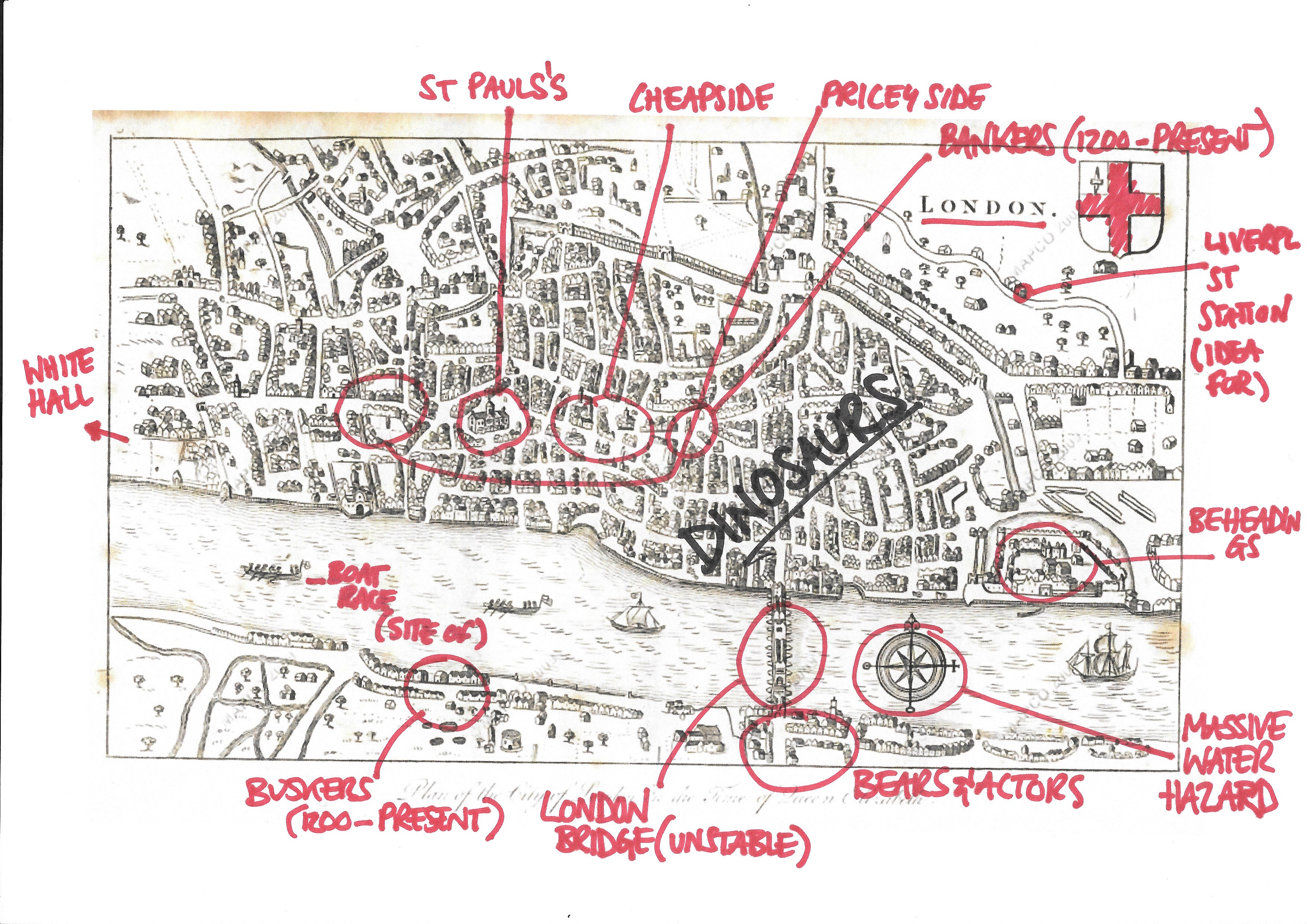 A map of London from the time of the Elizabethans who are not covered here for obvious reasons.

Well that’s all we could be bothered with. But then there was a bridge, a plague, some fire a new St Paul’s, a theatre, some bear fights, lots of georgian town houses, a parliament builidng, some sewage works, fog, a tube network, cars,  the Blitz, a smattering of hideous 60’s high rise, bankers, and airport, Canary wharf, the Dome, a pointless cross-river cable car, congestion charge and a building that burns cars. But nothing is quite as interesting as the Romans or DINOSAURS 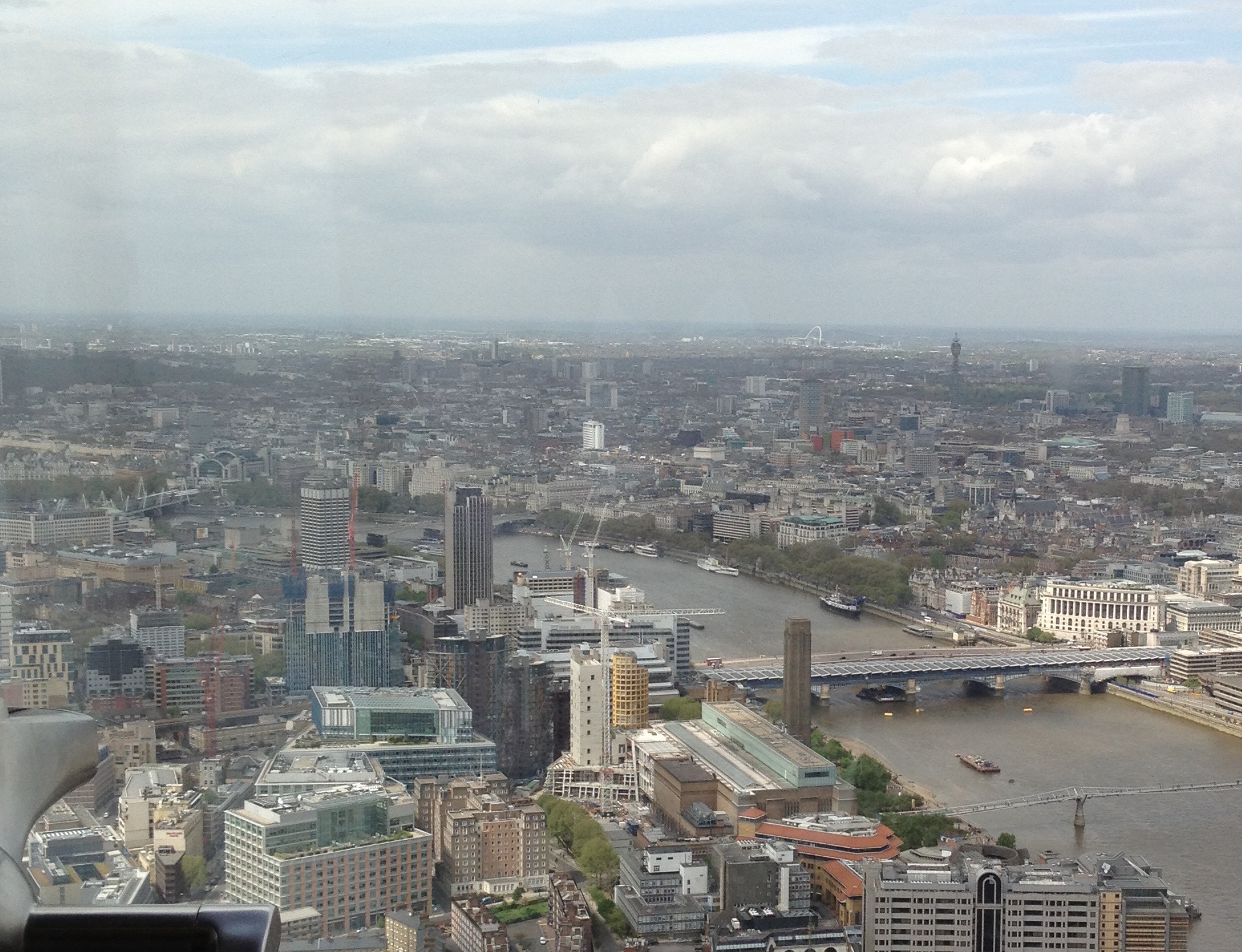 Leave us a comment if you’d like to hear more and tell other people because unless you do I don’t get paid for this.

I have some leaflets that covers other things here so I could copy them out. But otherwise I hope you’ve enjoyed this brief introduction to THE HISTORY OF LONDON!
Thanks

Lazy Planet -Fashion – on a budget!